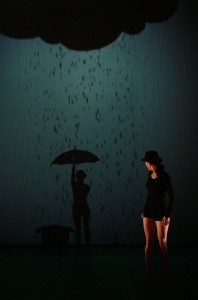 Aracaladanza, the critically-acclaimed Madrid-based dance company, brought their touring performance of Clouds, known in Spanish as Nubes, to Jerwood Dance House in Ipswich this week. Co-commissioned by Dance East and Sadler’s Wells, Clouds is a family show inspired by the works of the Belgian surrealist painter René Magritte directed by award-winning Argentinean choreographer Enrique Cabrera. It forms one third of a trilogy of pieces taking influence from visual artists El Bosco, Magritte and Miró. The performance was a surreal and energetic display of contemporary dance bursting with quirky imagery, the narrative playing out like a symmetrical dream. The piece began with box-shaped miniature houses piled up in the centre of the stage. Lit up in unison, they were individually taken off the stage by dancers dressed in over-sized jackets. One lonely house remained in the spotlight until a small fluffy cloud appeared. The black backdrop fell and the performance began. Aracaladanza danced with a multitude of clouds, ranging in size, shape and texture. The clouds weren’t limited to physical props: animated depictions were also projected onto the cloth at the rear of the stage. The excitement of the performance gradually built with costumes, characters and the tactile props becoming more bizarre, exuberant and inspiring as the piece progressed. A mixture of contemporary dance, contact and circus were on display to the attendees. Clouds treated the audience to a combination of both video and live performance in the same time and space. Duets and group dances were filled with comedy, and some solo pieces displayed a Martha Graham influence. Highlights included a group of faceless men in suits, dancing in an simplistic manner juxtaposed to a chaotic and playful theme tune, mischievous use of dancers’ shadows and the illusion of plastic rain falling upon the stage. Despite the energetic pace and creative theme, Clouds left me feeling like the performance was playing it safe overall. I felt that the surreal theme could have been pushed more, and that in trying to appeal to all ages Aracaladanza’s show lacked an edge from an adult’s perspective. That said, overall, Clouds is a wonderful offering of family entertainment and the young audience soaked in every minute of the unusual fun. I recommend you go to the next viewing, it will brighten your day.