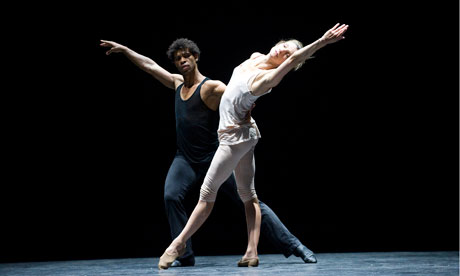 Carlos Acosta- Premiers Plus On the 29th July 2011 I was lucky enough to get to see the well talked about Premiers Plus. Conceived, Directed and Performed by the man himself, Carlos Acosta seriously set the bar high. I have personally wanted to see Carlos Acosta for quite some time. This is because he is a big name in ballet while he was with English National Ballet and now The Royal Ballet with whom he has been with since 1998 when Anthony Dowell invited him into the company. Carlos Acosta is becoming a household name and has really carved out a brilliant career as a passionate dancer and in my opinion this performance was worth waiting for. Premiers Plus becomes the third show that the cuban dancer has produced with Tocororo, a story based on his own life being the first and the second being Carlos Acosta and Friends. This performance was made up of 9 individual dances,both Solos and Duets each choreographed by top and up and coming choreographers and performed by himself and his Royal Ballet friend and colleague Zenaida Yanowsky. Choreographers in the first half included Will Tuckett, Cuban choreographer Miguel Altunaga, Brother of Zenaida, Yuri Yanowsky and well acclaimed Russell Maliphant with the beautifully danced ‘Two’. A piece I originally saw performed by Sylvie Guillem in 2007, A piece created for ‘the legs’ of ballet to show off her flexibility. Carlos Acosta made it into his own performance, with his strength and dynamics. It was surely the high light of the show for me. Choreographers in the second half included Oliver Award winner Kim Brandstrup, Simon Elliot with his amazingly beautiful slow short motion film, Edward Liang, George Cespedes and finally Carlos and Zenaida themselves. I found that overall some of the pieces were too similar and so the flow of the performance was very levelled all the way through. The performance was linked with a group of people walking across the stage, it obviously helped with the fast changes but It also became obvious that these people weren’t dancers but Pegasus choir. The performance finished with the stage being filled with the haunting sound of Pegasus choir singing ‘O Magnum Mysterum’ by Morten Lauridsen.Suddenly it all made sense as Zenaida laid down, with Carlos frozen in time reaching towards her. You could see the desperation on his face as she moved as if she was rising above the people on stage, and she disappeared behind the choir with the music and the piece slowly petered out as the curtain came down.